Galapagos Shark Diving in collaboration with The Galapagos Whale Shark Project would like to invite you on a SCUBA Dive Liveaboard with AMAZING WHALESHARK DIVING!

Dive with a Purpose - combine an incredible dive experience with research & conservation of Whale Sharks!

"I became more aware of how whale sharks had been exploited historically and also how industrial fishing both targeted and incidental was beginning to seriously affect certain populations. With this came the realisation that without baseline data and at least a rudimentary understanding of their life cycle there is no manner in which we can create the platform, legal and physical to protect them." - Jonathan R. Green

The Galapagos Marine Reserve (GMR), which straddles the equator approximately 600 nautical miles from the coast of Ecuador, is one of the largest marine reserves in the world. Its protected waters extend 40 nautical miles from a baseline connecting the major islands covering a total area of 130,000 square kilometres of Pacific Ocean and featuring a dynamic mix of tropical and Antarctic currents and rich areas of upwelling. The  (GMR), contains an extraordinary range of biological communities, featuring such diverse organisms as penguins, fur seals, tropical corals, large schools of hammerhead sharks and the world’s largest fish, the whale shark, Rhincodon typus.

Listed as Endangered in the IUCN 2016 Red List, Whale Sharks are threatened mainly by fishing activity. Traditionally hunted for their liver oil and for waterproofing wooden boats they are now widely sold for their characteristic white meat (referred to as “tofu shark” in Taiwan). Rapid reductions in numbers caught per unit effort have been seen in several areas where they have been fished including India and Taiwan, indicating that local populations are particularly susceptible to overfishing. Slow growth, late sexual maturation and potentially low reproductive rates mean that localised populations are unlikely to recover after collapse due to fishing.

Questions such as where they breed, where they give birth and where the young live for the first 3-5 years of life, are some of the questions the Galapagos Whale Shark Project has been trying to answer. The answers to these questions and more are necessary if we are to protect the species against the threats that face the future of all marine life.

Join the project on a seven-night / eight-day liveaboard into the Galapagos Marine Reserve, with local Guides & Dive Masters ( making the ration 1:4 divers) accompanied by Jonathan & Jenny, the experience will be amazing. Although you won't be tagging or touching the whale sharks your help is needed to record the whale sharks with your photography. Each day there will be presentations, talks on, how the research is being used and what the data tells us. If you're unsure on photography the team was involved in the filming of David Attenborough's' Blue Planet II so there will be a comprehensive guide to what to look for and photograph.

Feel great that you're helping to support these majestic gentle creatures and looking to protect their future.

THIS WILL BE A DIVE LIVEABOARD EXPERIENCE LIKE NO OTHER!

OUR MISSION - WHY WE LOVE WHAT WE DO

Give back to nature and marine life! 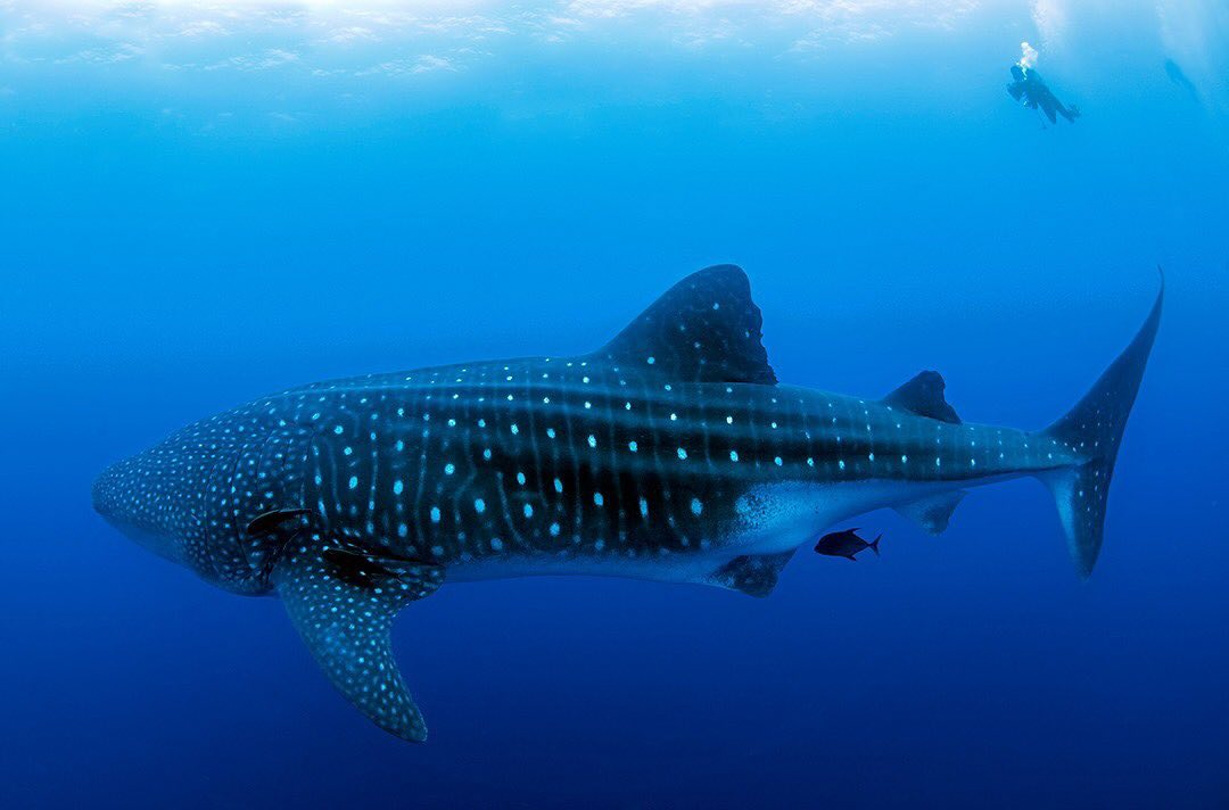 The overall objectives of the study are:

In order to achieve these objectives, we aim to:

JONATHAN R. GREEN is the founder and director of the Galapagos Whale Shark Project.

He is a graduate of the University of North London, an elected member of the Royal Geographical Society of London and, when not on the Galapagos, works on expedition ships in the polar regions. He also teaches photography workshops in locations around the world and has received several international awards.

With over several thousand dives in the surrounding waters of the Galapagos, nearly three decades of working in this region he will lead your tour. 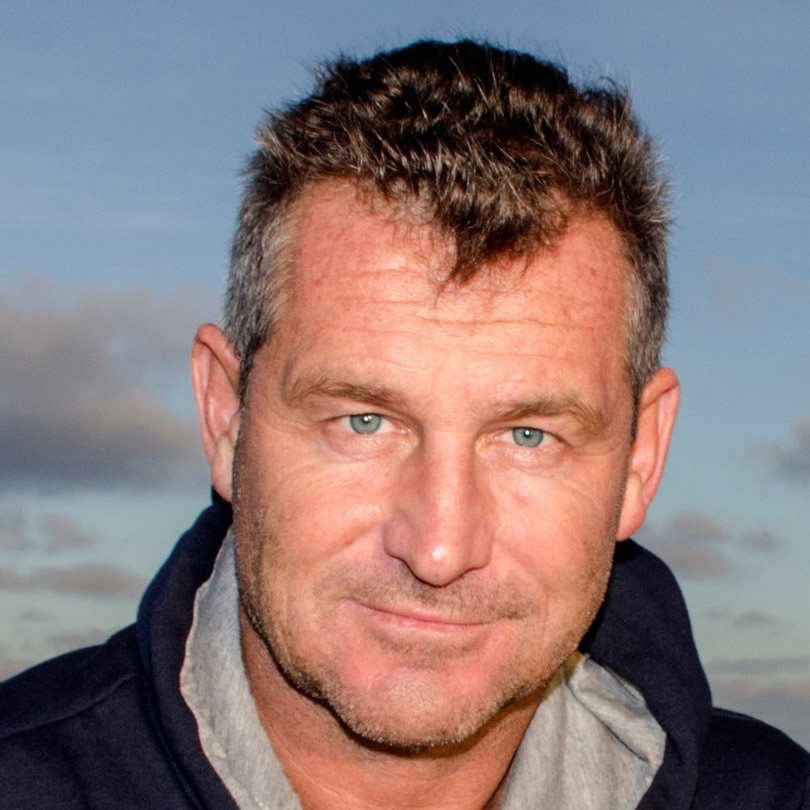 JENNY WAACK is the founder of Galapagos Shark Diving which supports the research of the Galapagos Whale Shark Project.

After graduating in International Investment Analyst & working for many years in Investment & Retail Banking in Germany, she decided to follow her passions - travelling, diving and discovering the world. On her travels, she fell in love with whale sharks, the Galapagos Islands and the marine environment. It was this that has made her dedicate her life to protecting these gentle giants and the oceans.

She founded Galapagos Shark Diving to create a platform to support different research projects in the Galapagos, especially the Galapagos Whale Shark Project.

When she is not involved in diving or research, she works on an expedition ship in remote polar regions and promotes the conservation awareness of the marine environment. 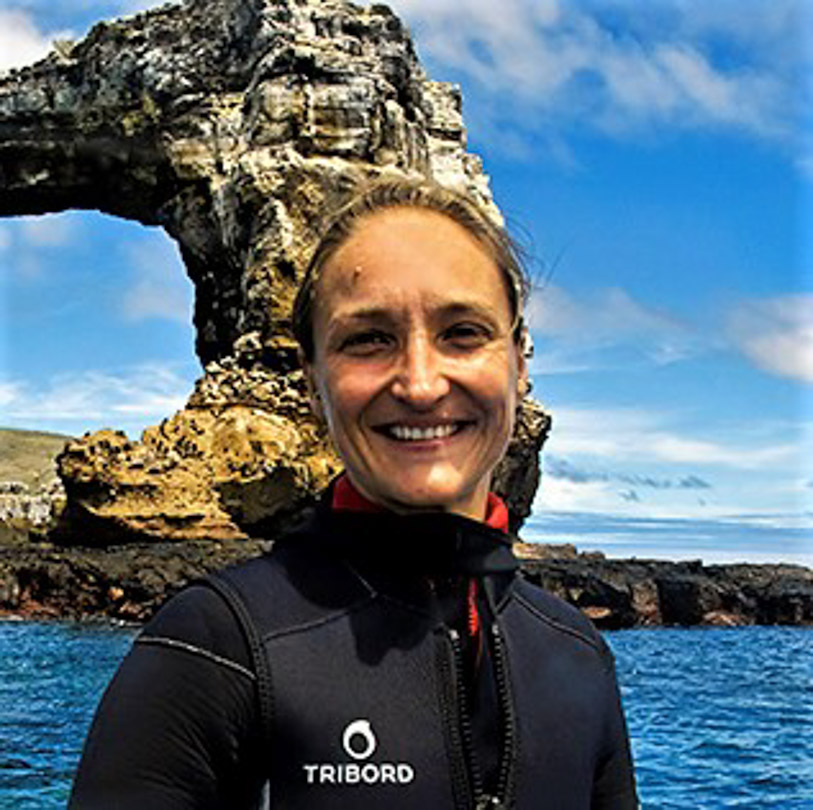 The AQUA provides a unique and unforgettable experience, with the best service and diving that you could hope for. The boat has nine cabins with ensuite bathrooms, air conditioning, electricity and all that you may need to make your stay comfortable. Our yacht is nicely designed and furnished, but it’s our operating staff that complete your experience onboard and in terms of safety, care and maintenance, they are second to none. 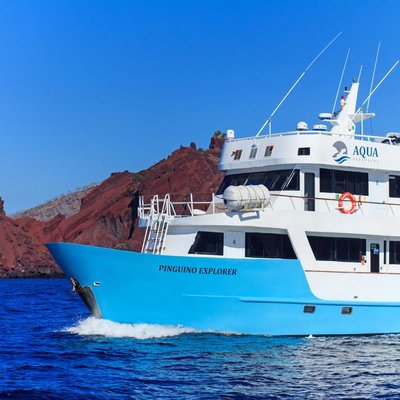 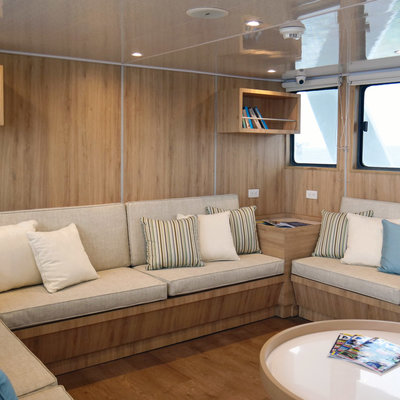 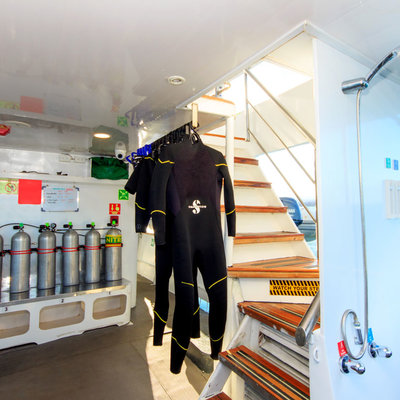 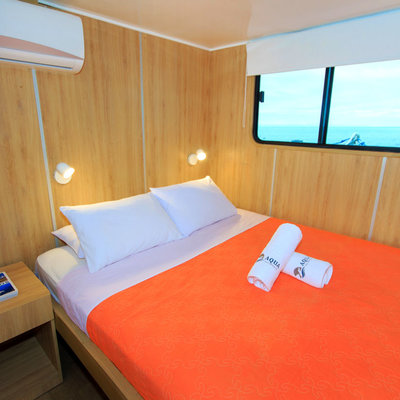 The upper cabins on the main deck have windows that will allow you to enjoy the beautiful sunrise and sunsets of the Galapagos Islands. The lower cabins have portholes with an ocean view and natural light.

A very spacious lounge & dining area with wood surround allow comfort and a great area for working with cameras, photography and lectures/workshops.

After each dive, guests can relax in the lounge, on the sundeck or outer decks ideal for yoga, simple meditation or wildlife observation. All meals will be a mixture of local and international cuisine and hearty fare for divers.

With the capacity for 16 divers but restricted to 14 divers, it means you will have personalised service, space to relax & a really comfortable relaxed trip. All dives are done from a dive panga, (tender) which offers easy access to all of the best dive locations.

The Galápagos Islands are situated in the Pacific Ocean some 1,000 km from the South American continent, these 19 islands and the surrounding marine reserve have been called a unique ‘living museum and showcase of evolution’. Located at the confluence of three ocean currents, the Galápagos are a ‘melting pot’ of marine species. The ongoing seismic and volcanic activity reflects the processes that formed the islands. These processes, together with the extreme isolation of the islands, led to the development of unusual animal life – such as the land iguana, the giant tortoise and the many types of finch – that inspired Charles Darwin’s theory of evolution by natural selection following his visit in 1835.

Today the wildlife abounds with whale sharks, hammerhead sharks and Molas, and that's just under the water. With such diversity of wildlife, every day is a wonder! 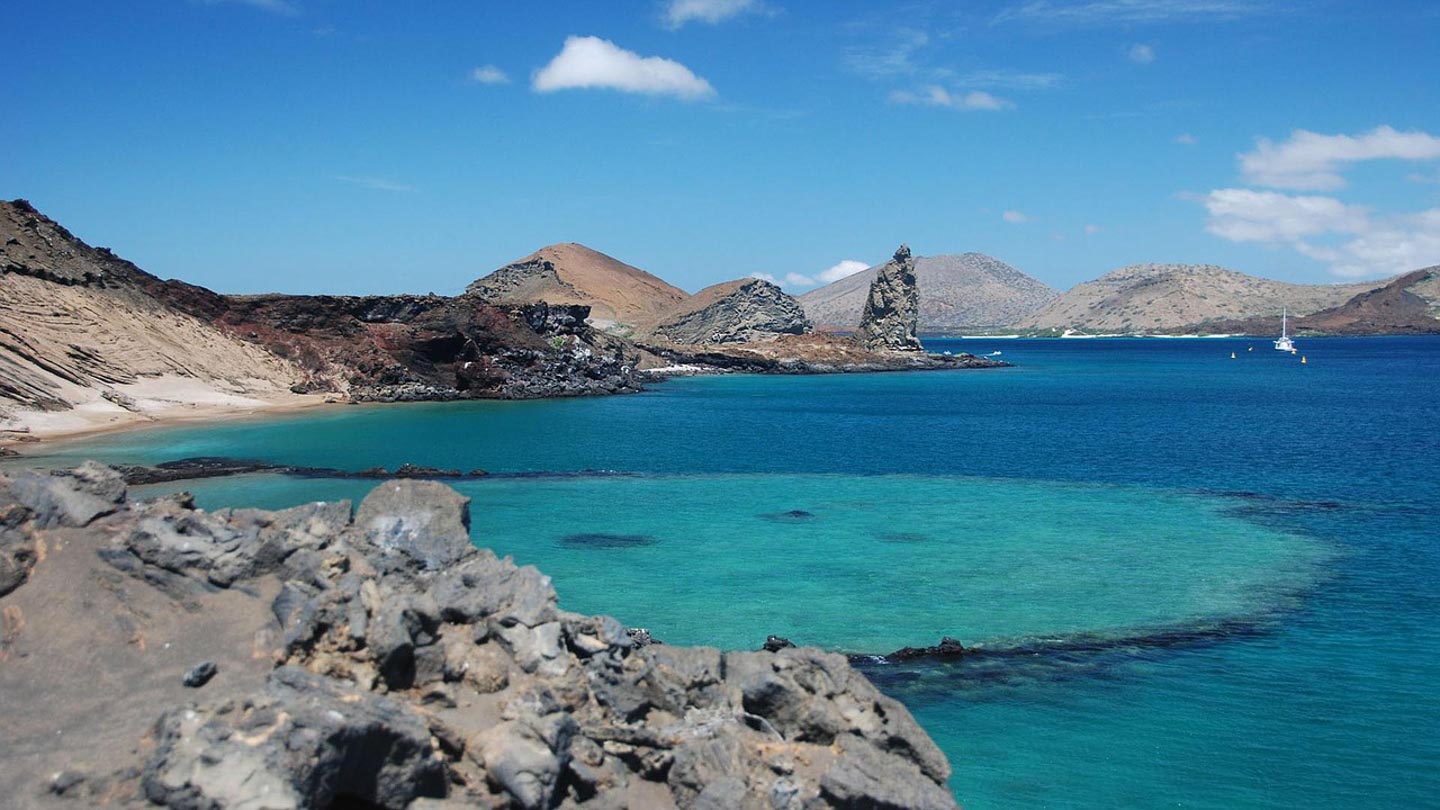 The diving is amazing but please keep in mind that it is varied & demanding. Diving is for advanced divers because of the extreme conditions - cold water, strong currents, and limited visibility, but nevertheless, there are very good sites for intermediate divers. Divers visiting the Galapagos must have an Advanced Open Water rating & more than 50 logged dives.

All diving will be conducted from dive tenders in small groups, up to four divers with a local guide. Maximum depth is the recreational limit of 30m.

With the Whale sharks ranging in size of 12-14 meters, every dive with these large fish is awesome! 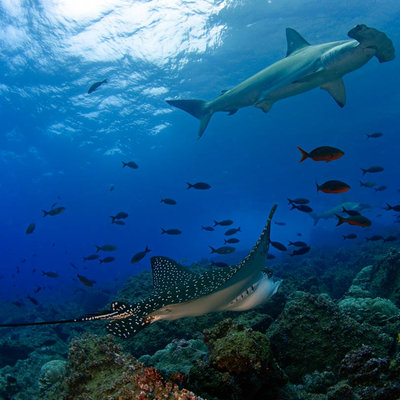 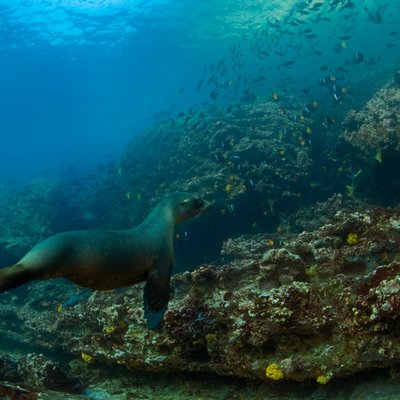 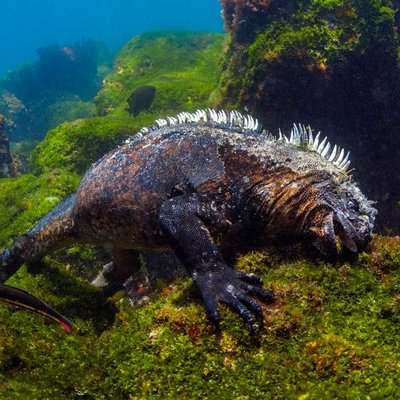 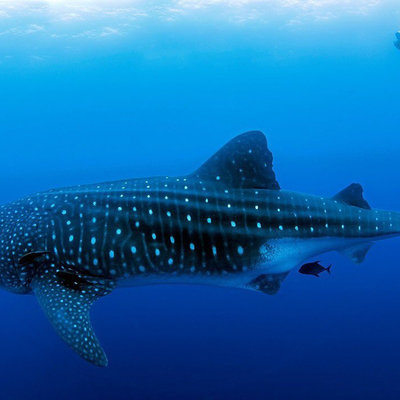 Due to the remoteness, dive conditions & exclusive use of the vessel, the following terms will be applied.

A deposit will be required on booking to secure your spot. The departure dates are guaranteed to run, no minimum numbers to be reached.